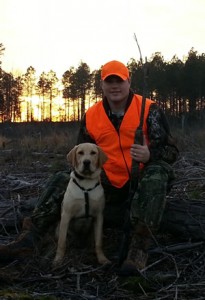 I just wanted to send y’all an update on how our puppy Boone is doing. He is from the Snatch/Honey litter and he looks just like his father. He’s just over six months old now and he’s panning out to be a wonderful hunt dog.

I began shooting around him just recently and from the very beginning he was fearless. He didn’t even blink an eye when the shots were fired. He just looks straight ahead waiting to be released.

As far as family is concerned he is a wonderful new addition. He is such a lover and truly enjoys being with his people. I also have to admit that he might be a bit spoiled, but we enjoy having him know that he is loved. We couldn’t have asked for a better companion. Thank you for bringing him into our lives. I will continue to train him and develop him into a great hunt dog. All of the foundations are there, we just need continued reinforcement as any good hunt dog does. Thanks again,

” I have known Twin Lakes Kennel and Woody Thurman for more than 20 years. Woody is a superb dog trainer and teacher about retriever training. Twin Lakes is an extraordinary facility. Their puppies come from the finest hunting and field trial/hunt test stock. All will have clean genetic pedigrees. Most importantly, Woody is an honest, straightforward man who will tell you both the strengths and weaknesses of any dog he sells or you wish to have evaluated. I would stake my own reputation on this.”

“Jack Scanlon loved his family, the infinite beauty of nature and dog men like me. The world has lost a man of great sensitivity, wisdom and spirit. He was wonderful friend.”   Woody Thurman

“For 11 years it was my distinct honor and privilege to serve as chairman of the rules committee for the AKC Retriever Hunt Test program.  During that time I got to meet many professional retriever dog trainers all across the United States.  Woody Thurman, whom I have known for more than 20 years, was and is my favorite.  He is an extremely intelligent, honest, hard working and trustworthy man.  In addition, he has a unique natural gift in knowing how read and train a dog that I have seen only a few possess. He is a truly outstanding professional dog trainer and, supported by his wife Judy, has devoted his life to his trade.

Unfortunately, with today’s free access to the Internet, anyone can hold himself or herself out to be a good dog trainer.  All that I can tell you is that from my years of personal experience in the Hunt Test program as both a participant and Judge, Woody was the man that I instinctively went to twice for what proved to be magnificent Labrador Retrievers.  He helped train both of them (and, me too).  I highly recommend him, without qualification, to anyone looking for a retriever or to have one trained and cared for properly.  He will get the most out of your retriever while treating and training it as if it were his own.”

“We have been blessed to know Woody & Judi for over sixteen years. Not only have they played a feature role in this period of our lives; in many ways their presence defined it.  Three of their dogs became our dogs. The love, devotion, and superior training Woody and Judi provided for their dogs—which then became our dogs—has impacted us daily.

“We researched trainers, breeders, duck hunters and handlers. Woody Thurman’s name was always first on the list—not somewhere on the list but first—as in the very best to buy a dog from, have it trained by, and handled by.  Woody is brilliant. His skill, knowledge and understanding of the way to train and develop Labradors can only be appreciated if you are blessed to witness it firsthand and own one of Woody’s dogs.

“We’d never thought of a dog as an athlete until we saw Woody’s dogs. All of them have such awesome form and style. His dogs know it, show it and prove it with one incomprehensible feat after another. To see Woody and his dogs work is nothing short of captivating. We were awestruck and knew we had to have one of Woody’s dogs.  Their dogs—our dogs—certainly ended up owning us. Every second owner will tell you the same: the dogs always belong to Woody and Judi. They deserve the credit, God deserves the glory and our cup runneth over. Because of Woody and Judi our dogs had the ability to deliver moments and days and years of treasured time together. Yes, indeed, their presence defined us.”

“I met Woody Thurman on a visit to Twin Lakes Kennel in 2000 with a senior executive from Ralston Purina.  I am no rookie to this process.  This would be my fifth hunting dog and I wanted a male which could do it all—pheasant, ducks, and geese. When Woody interviewed me, I told him I had trained two of my own dogs, so I had a good idea what I wanted.  He showed me a two and half year old Labrador Retriever named Chase and that was that for the next eleven years! Did I mention I also needed a dog who would be part of the family?  He was the greatest hunter I have ever seen on all birds and a great friend.

“I consider Woody Thurman a teammate.  He is honest, has an undeniable sense about dogs, and above all, knows what you need in a dog.  I bought my second dog from Woody three years ago, the most dominant female I have ever experienced.  But again, she is an outstanding hunter, great with people including our grand daughter.  Trust is the core value of a team; good judgment is also a key ingredient for success in any situation. Woody and his wife, Judi, are the Best.  We are blessed to have them as teamster!”

“I have known Woody Thurman for most of my adult life and that’s been a long time since I am now sixty-six years young.  He loves his wife and family; he loves music; he loves literature and he loves his Labrador Retrievers.  His character and integrity come through in the Labs he so lovingly trains.  You will not go wrong choosing a Labrador Retriever for the hunt or for the home from this man.”

Read what Mindi says about her new puppy, Piper.

I wanted to say thank you, again, for putting up with me during the puppy process!  You all were so sweet to send pictures and answer my questions, and I thoroughly enjoyed meeting and working with you.  “Piper” is settling in wonderfully!   You were also right about how smart she would be! Piper learned “sit” on her second day home, and I can tell that she is already picking up on some of the “getting around” terms I use with Bauer like “this way” to redirect her course.  I’m so excited to watch her really start learning!

April and her family are loving Guage, their new Lab. 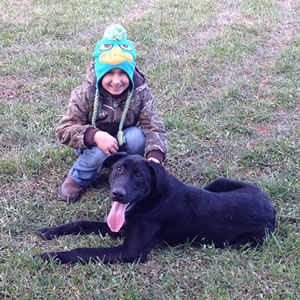 I just wanted to send y’all a quick note updating you on our sweet Gauge that we picked up back in May (Snatch x Raven). It’s hard to believe that he’s 8 months old and is already going on his first hunts! Here are a few pics of him.  You can see how he’s developed. He’s beautiful and is so agile and LOVES to hunt. His drive is unbelievable and he’s surpassed all of our expectations with how smart he is.  We hope that you are all doing well and thank you, once again, for our amazing dog.

Ted and Smoke are bringing home the ducks.

Thanks, again, for breeding the best dog in the world as far as I am concerned! Smoke is really shaping up to be every ducks worse nightmare.  I can’t thank you enough.  By the way, Smoke went 17 for 18 in the last 2 days. He is a natural with amazing drive.  Thanks, again.  Ted

Here are more happy owners of our Labrador puppies.