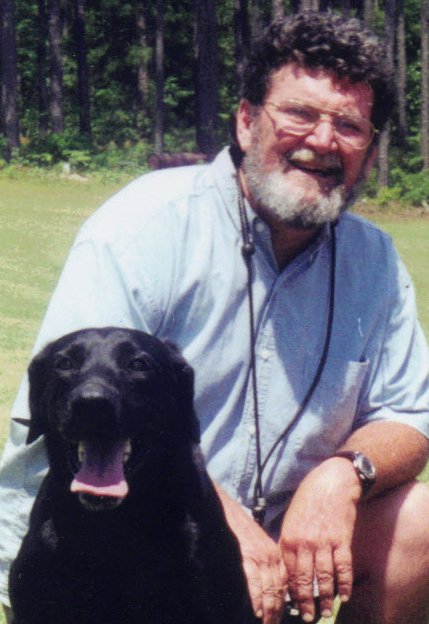 At the heart of the Twin Lakes Kennel training program is Woody Thurman, Master Trainer of Labrador Retrievers. Woody, the only son of Carl Thurman, a noted pointing dog trainer of the 1950’s, developed a special sensitivity for dogs and an awesome respect for people who could train them, while still a toddler.

He has devoted most of his adult life to training and breeding hunting Labrador Retrievers. Woody’s amazing ability to thoroughly teach each lesson to each dog on an individual level reflects itself in working Labrador Retrievers that are under control, but maintain all the natural drive and style that are the essence of hunting retrievers.

Woody was born in 1947 in Charleston, South Carolina.  His father, Carl, was gifted in his ability to communicate with animals…especially with dogs.  The Thurman family always had several dogs.  Carl believed in “Working Dogs” and he worked with them and trained them to be well-mannered and obedient.  People would come over frequently in the late afternoons to see him lead the dogs in some mini exercises such as fetching, holding a point, and sit-stay drills.  People would marvel at his ability to trust his dogs not to “break” a command.

Woody learned these methods from his father from the time he was able to imitate him.  The basics of his training—RPM, Repetition, Patience, Motivation—are still the heartbeat of his work with his dogs.  It has been wonderful to observe Woody taking what he learned from his father and using it as his main means of livelihood throughout his life.  He is now teaching and instilling those principles into his son, Perry.

Even though Woody has always been an outdoorsman and gone hunting and fishing, he has had many varied interests during his colorful life.  He lettered in football, basketball and baseball  in high school.  He was also in drama productions and played both the trumpet and the Sousa phone in the band.  He majored in English Literature and Creative Writing at East Carolina University and was a published poet in his early 20’s.

Woody had a great love for music from the time he was a little boy.  He especially enjoyed country and western and gospel music.  During the 70’s he became greatly involved in Blue Grass music and its contribution to the entire American musical genre.  Among the folk heroes that he met during those years, is Bill Monroe, the Granddaddy of Blue Grass.  He began putting his own band together during those years and fused a combination of Blues, Gospel and Rock that gave his band–Singletree–a distinctive flavor all its own.  He became exceedingly popular from Myrtle Beach to Atlanta during those years and after much thought and soul-searching, chose not to continue to follow the night life and music, but to return to the earth and country life and the raising and training of dogs.

Many of Woody’s clients are amazed at his knowledge of the classics and show surprise when he quotes a poem as the source of a dog’s name.  He often takes his guitar to hunt tests and has been known to lead sing-a-longs  with handlers and owners in the evenings after a long day of field trials and work.  His knowledge of poetry and the King James Version of the Bible often astound his clients.

He met his wife Judi during their junior high school years. Judi taught in the gifted program of the local middle school until 1999.  Woody asked her to retire and join him in the business full time.  They have worked together and have expanded their scope.  Judi is now in charge of the Puppy House and is the puppy expert.  Woody maintains his role as major trainer and handler. Together they make an amazing team. Their lives have influenced many people over the years.  Their marriage is a beautiful relationship of honor, respect and deep, abiding love.

He has earned the title of Master Trainer, with more than 200 AKC Master Hunter Labrador Retrievers.  Woody has also qualified 47 retrievers at AKC Master Nationals.  He has won the Ducks Unlimited Open Championships twice.

He is a member of the American Kennel Club (AKC), Ducks Unlimited and the Labrador Retriever Club.

Are you interested in learning more about labrador retrievers for sale or obtaining Labrador Retriever training from Woody Thurman?  Call us for more information  at (910) 462-3246!