Labrador Retrievers For Sale in Tennessee

According to the registration statistics compiled by the American Kennel Club, the Labrador Retriever is the most popular pure bred dog in the country. 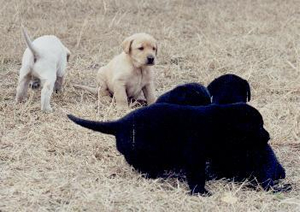 In a recent press release, the American Kennel Club® (AKC) announced the Labrador retriever is, once again, the most popular purebred dog in the country. “Labrador Retriever lovers have again spoken – the playful, family friendly breed remains the number one most popular breed in the U.S. for the 22nd consecutive year, tying with the Poodle for the longest reign in the top spot.” Read the rest of their article here.

“Bigger breeds are making their move,” said AKC Spokesperson Lisa Peterson.” The popularity of the pint-sized, portable pooch just gave way to a litter of larger breeds in the Top 10. These predictable, durable, steady breeds, like Labs and Goldens, are great with kids and offer the whole family more dog to love.” More than twice as many Labs were registered than any other breed making it a likely leader for many years to come.

Labrador Retrievers For Sale in Tennessee

Our Labs can be found across the country in forty (40) states from the great Southwest to historic New England, from frigid Alaska to Tennessee. Located near Laurel Hill, NC, we have delivered more than 8,000 world class Labrador retriever puppies and adults to locations as far away as Alaska. We can easily deliver our guaranteed Labs to your location in or around Tennessee. For details, Visit our Puppy Page or call Woody or Judi for up-to-the-minute puppy information at 910.462.3246 or use our user-friendly Contact Us Page.