Labrador Retrievers For Sale in Del.

Recently announced by the American Kennel Club (AKC), the Labrador Retriever is, once again, the most popular pure bred dog in the United States. 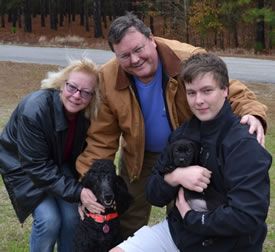 Labrador Retrievers For Sale in Delaware

Our Labs can be found across the country in forty (40) states from the great Southwest to historic New England, from frigid Alaska to the Sunshine state. Located near Laurel Hill, NC, we have shipped more than 8,000 world class Labrador retriever puppies and adults to locations as far away as Alaska. We can easily send our guaranteed Labs to your location in the state of Delaware. For details, Visit our Puppy Page or call Woody or Judi for up-to-the-minute puppy information at 910.462.3246 or use our user-friendly Contact Us Page.